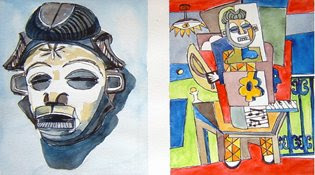 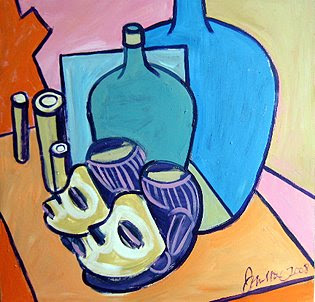 Well, to start off with, it was ENORMOUS - Picasso was the twentieth century Michelangelo.

The pity is that every now and then one hears Picasso being denigrated. "One of my kids could have done that," is heard more often than one would expect. And it's nothing new. Here are some comments taken from readers' letters to The Guardian in 1947 following an exhibition in Manchester. "The bewilderment caused by Picasso's latest pictures indicates his failure to maintian his position as an artist." And: "The only sign of sanity in the dismal rooms was the disgust of the crowd."

Well, at least they'd taken the trouble to look some of the paintings before commenting. This is not always the case.

Anyone who thinks Picasso was a charlatan who couldn't paint and draw should have another look at his early work. Then consider what he said about himself. I've quoted this elsewhere on this blog, but here it is again: "It took me four years to paint like Raphael, but a lifetime to paint like a child." He also said: "All children are artists. The problem is how to remain an artist once he grows up."

If you're still not convinced, think about (or even better, look at) the art movements he started, influenced, participated in and usually dominated. Starting with traditional acadamec realism as a student, he quickly moved on to experiment with Post Impressionism, Fauvism, Cubism, Dada, Expressionism, Surrealism and then on to his individual and personal "classic abstractionism".

At the beginning of the century there was an explosion of interest in anthropology and what was then called "primitive" art. And the very popular exhibitions of ethnic material culture had a decided influences on the Cubists.

The two paintings above are my homage to the influence of ethnic masks on Picasso's work, especially "Les Demoiselles d'Avignon." Beware: here comes the commercial. Both are for sale. The watercolour (23 x 35 cms) on paper is 150 Euros (save 50 Euros) and the "abstracted" painting of a "Still Life with Mask" (600 x 610 cms) is 200 Euros. Both prices include postage and packing. For more information please contact me at:
ray@johnstonesinfrance.com
Posted by Ray Johnstone at 10:04