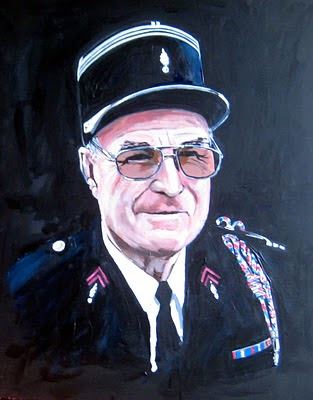 Pompier Francis Glise plays the bugle at all the official ceremonies in Mézin.
He replaces Noel Sudbury on my exhibition. Noel is going to England.
Posted by Ray Johnstone at 14:49 No comments:

THE BISHOP OF AGEN 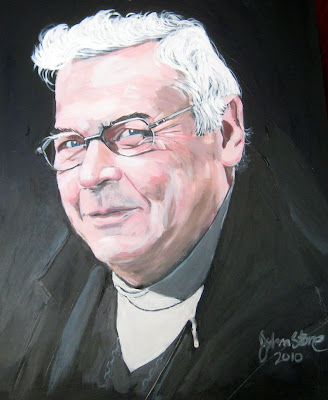 He came to Mézin for a few days, so the curé asked me to paint his portrait.
This fits in perfectly with my idea to add to the exhibition as I complete more paintings.
My painting of Patrick at the Bar du Commerce has gone, so Mgr Hubert Marie Michel Marcel Herbreteau takes his place. Until we deliver him to Agen in the first week of December.
Crissie Mead says I must remember to kiss his ring.

If you have any comments or queries, please send me an email.
Please click here.
Posted by Ray Johnstone at 14:30 No comments:

I hope the photos speak for themselves...
Please let me know what you think.
ray@johnstonesinfrance.com
(Click on "Contact Us"). 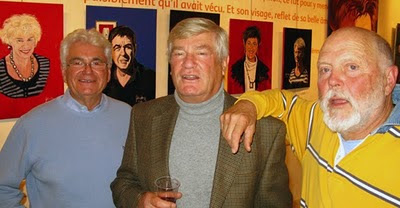 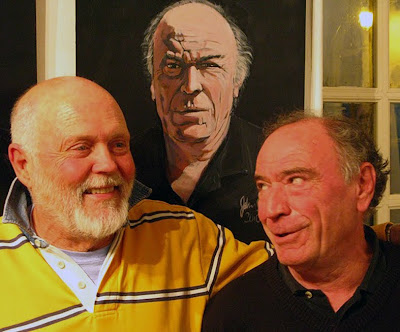 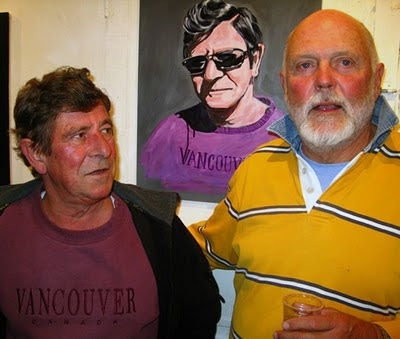 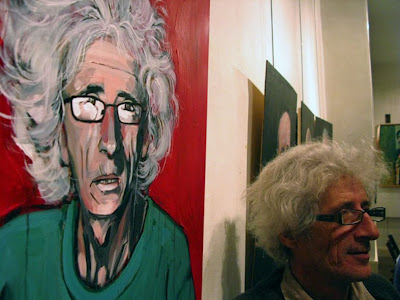 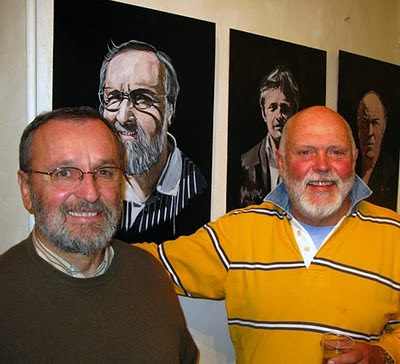 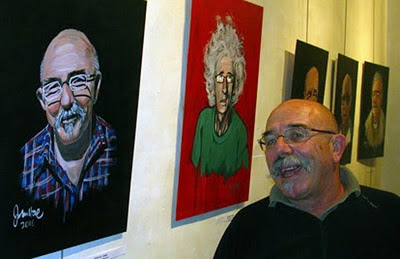 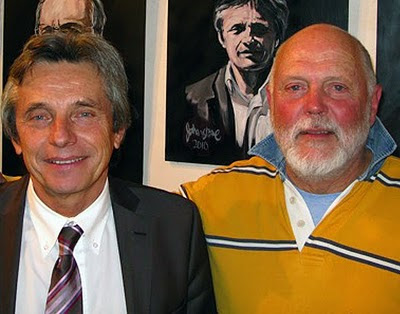 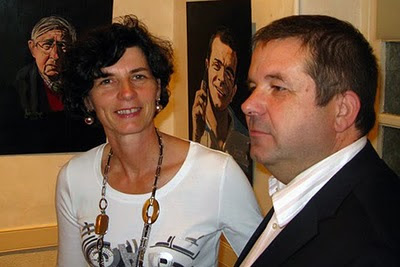 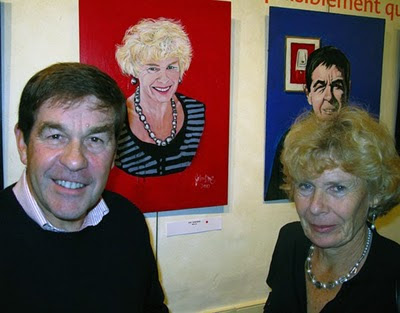 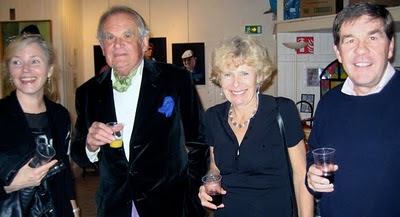 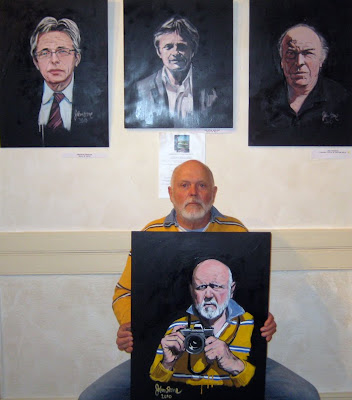 Posted by Ray Johnstone at 08:31 No comments:

The paintings consist of a series of portraits of the people of Mézin done over the past few months - plus several others that I have painted over the past forty years. 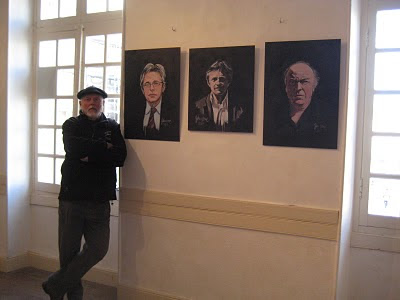 PORTRAITS OF THE VILLAGE PEOPLE BY RAY JOHNSTONE

Oliver Cromwell asked his portraitist to paint his portrait ‘warts and all’, and I hope my 50 paintings of the people of my village of Mézin and others follow this imperative. I’ve never flattered my subjects, in the hope that my paintings wouldn’t be compared with chocolate box designs.

The works on show consist of a series of portraits of the people of Mézin done over the past few months, including several petanqueurs, Monsieur le Maire, the baker, les patrons des bars, an accountant, the priest and the church organist.

Armand Fallieres is there too. He was born in Mézin and became President of the French Republic from 1906 to 1913.

Also included are other paintings that I have done over the past forty years.

You can see the exhibition during office hours at the Tourist Office in Mézin until the end of December. 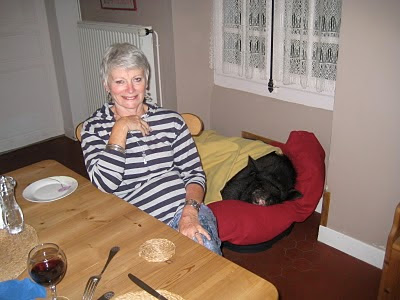 DINNER WITH A PIG 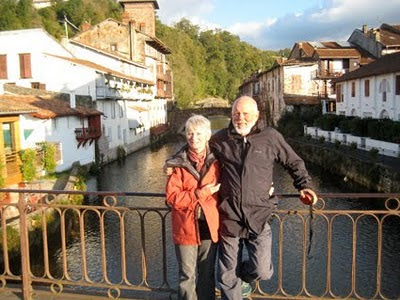 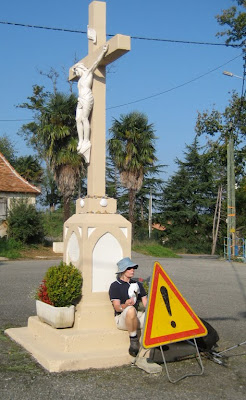 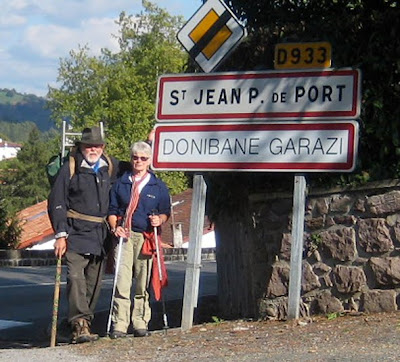 THE LAST TOWN IN FRANCE - AT THE FOOT OF THE PYRENEES
Posted by Ray Johnstone at 07:00 No comments: 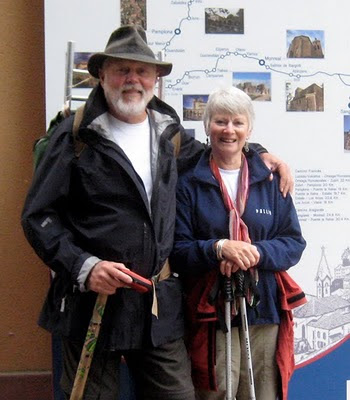 Two weeks after we started we crossed the border into Spain, half way up the Pyrenees.
No wonder we look so pleased.
Posted by Ray Johnstone at 06:57 No comments: 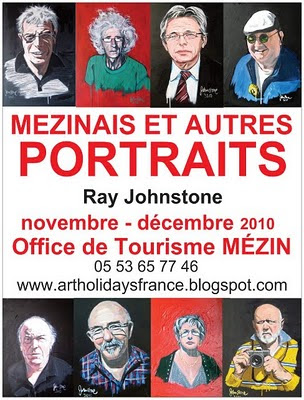 45 Portrait paintings are now on show at the Tourist Office in Mézin.
Please visit the exhibition if you live in or near the village.
It's only 15 kilometers from Condom or Nerac in SW France.
Posted by Ray Johnstone at 05:57 No comments:

ON THE WAY TO A HANGING 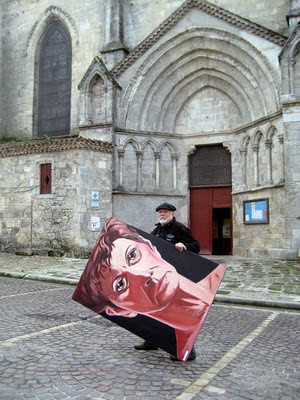 My favourite painting of Lynne - a protrait I did in 1992 - on it's way to the exhibition. In the background is the wonderful St Jean-Baptiste, the gothic church right in the middle of the village of Mézin.
MÉZINAIS ET AUTRES PORTRAITS is now open at the Tourist Office.
Posted by Ray Johnstone at 05:34 No comments: 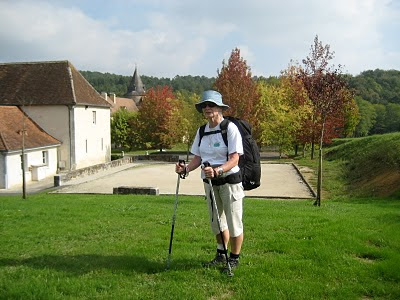 One of the few problems one encounters when walking to Spain is badly brought up dogs.
Here's an email I sent to Lucinda Prior. Every word is true.
Bonjour Lucinda,
I hope this follow up on your recent phone call to us is of some interest:
As you now know, Lynne, George and Robin and I were walking from Mézin to the Pyrenees when your phone call came through to Lynne. She passed on to us how you had been hassled by a dog that eventually bit you when you were doing the same walk a few weeks earlier.
Needless to say from then on, every time we heard a dog barking, someone said ‘that could be the dog that bit Lucinda.’
Anyway, by chance, just after your phonecall, (and much to George’s disgust I suspect) I bought a catapult from a hippy who was selling them in the market. I put it in my rucksack and promptly forgot about it.
A few days later we were walking about a hundred metres behind another group of pilgrims when a pack of dogs ran out and started barking very aggressively at them.
A few minutes later it was our turn. The dogs were hassling and snapping at us in a very frightening manner.
But luckily I’d managed to pull the catapult out of my bag and pick up a stone.
Well, I must confess that I’d used a catapult thousands of times when I was a kid, and never managed to hit anything - except a few neighbour's windows. But St Jacques must have been on my side. Just as these dogs rushed at us – Lynne and Robin were fending them off with sticks – I put the stone in the pouch, pulled back the elastic, and aimed at the most aggressive dog. When I let go, St Jacques made sure that the stone hit the dog right between the eyes. There was a loud ‘thunk’ and a sharp spurt of blood. The dog promptly stopped barking and started yelping. And it kept on howling as it ran off down the road followed by the rest of the pack. The last we saw of it was it’s arsehole disappearing over the horizon.
Lucinda, I must say that I fervently HOPE it was the dog that bit you, and I trust that you are as pleased as I am with my shot.
The moral of the story is this: pagan dogs shouldn’t fuck around with Christian pilgrims.
Love to Luke and Minty.
Gros bisous.
Ray
P.S. like a WW2 fighter pilot - or a gunfighter - I've cut a notch in the handle of my catapult and simply labelled it "dog".
Posted by Ray Johnstone at 05:33 No comments: 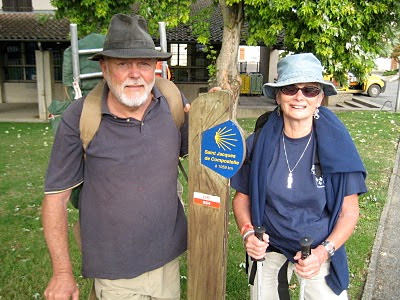 In October we decided to walk to Spain. We've been talking about it for years.
The ancient, medieval road to Compostella goes right past our front gate. The final destination - the Cathedral of St Jacques in Compostella - is six weeks away on foot. Or, as you can see on the signpost, 1056 kilometres.
Probably too far for old codgers like us to do in one hit.
Se we set our sights on the Pyrenees. Or about 250 kilometres.
We set off from La Poste in Mézin at 10.30 on Thursday 13 October, and arrived in Montreal late the same afternoon. (Only 17 kms away).
Send me an email if you would like more information on walking to Compostella.
Please go to the following link and then use the email at the bottom of the page.
ray@johnstonesinfrance.com
Posted by Ray Johnstone at 05:32 No comments: 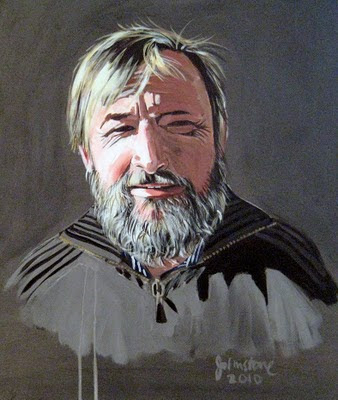 This is the priest. He lives in the presbytere.
He comes from Poland. (Like England is short of plumbers, France is short of priests).
He speaks good French and, I presume, Polish. He also talks some English.
(Apologies for starting so many sentences with "he").
Posted by Ray Johnstone at 17:52 No comments:

CAFE DU MARCHÉ - THIS IS CORRINE 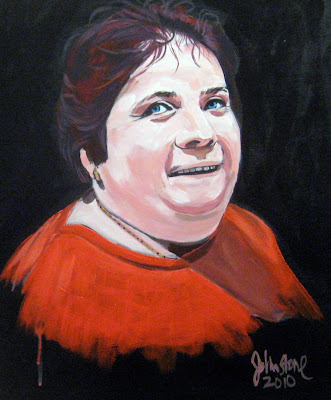 Mézin has 5 bars. Not bad for a village this size. (We also have 4 bakers and a specialist boulanger who comes to the Sunday market). Which means we should never be short of a drink or a loaf of bread.
The Cafe du Marché has been in Corrine's family for years.
Posted by Ray Johnstone at 17:50 No comments: 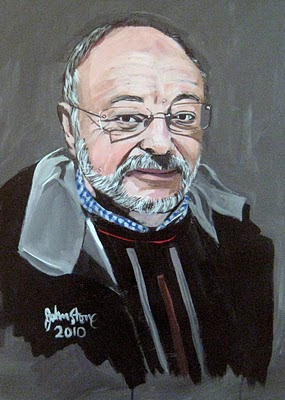 Accountants in France are all known as expert compteuse or 'Expert Accountants'.
Not sure why this is, but let's hope it's accurate. (In any case, all accountants should be accurate).
This accountant's name is Christian Forsans.
Posted by Ray Johnstone at 17:43 No comments: 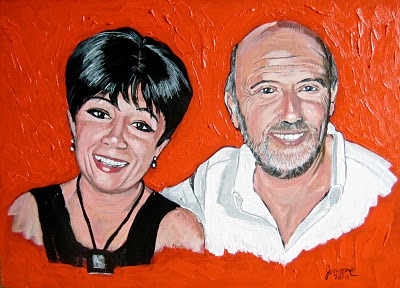 This is Harry's Christmas present for Lisa.
It's done from a rather dark photo taken in a restaurant.
Hope she likes it.
Posted by Ray Johnstone at 17:41 No comments: