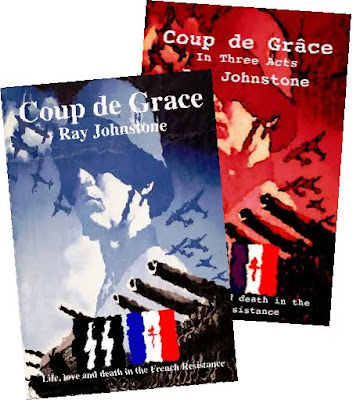 The novel I’ve been working on for the last ten years, “Coup de Grace” and the film script based on this book “Coup de Grace In Three Acts” are both now available through Amazon and other online book sellers.
As you can see above, their covers are based on a Nazi recruiting poster. To this I've added Charles de Gaulle's symbol of a free France, the Cross of Lorraine, which was used by the French Resistance - as well as an SS symbol, because the notorious German division Das Reich also plays an important part in the story.

WARNING:
These books are not for everyone.
They are about the dreadful, bloody and barbaric things that happen in war. And they are presented in the bluntest manner.
Many of the characters express decidedly anti establishment views.
Strong language is common.
There are several graphic sexual scenes which may not be to everyone’s taste.
And the overall theme in both is decidedly and unashamedly anti war.
As I've indicated above, some people may have problems with this book, but for those of you who would like to make up your own minds, here is some further information. 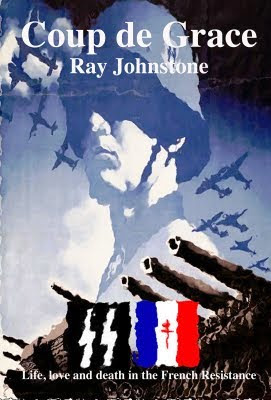 “Coup de Grace” is a novel about France in the two World Wars.
Although it is a work of fiction, most of the story is based on fact.

Here is a short synopsis:

A few days after Billy Leigh's nineteenth birthday, Roland Murphy sees him hit in the mouth by a sniper's bullet. The outback boys are fighting for the King’s shilling on the western front.
Between the wars, Roland’s son Philippe and his best friend Paul are in love with the same girl - but she only has eyes for Paul.
And she really loves the scar on Paul’s face - it makes him look as if he's always smiling.
During the Nazi Occupation, Philippe and Paul are constantly on the lookout for German troops who are always after French kids to send to work in German factories.
To avoid this compulsory labour scheme Paul decides to join the Milice or French Gestapo.
But Philippe takes a different route – he joins the French Resistance.
The two boyhood friends are now on opposite sides in one of the bloodiest conflicts in history.
While hiding from the Nazis in the forest Philippe goes swimming with some young patriots. He notices that one of them is circumcised - this French boy must be a Jew.
Just after D-day, in an abortive attack on Das Reich - a crack German division - Philippe is badly wounded. A friend tries to hide him in the undergrowth, but he is found by a German patrol.
One of the officers has a scar on his face. And his mouth is twisted into a permanent smile... 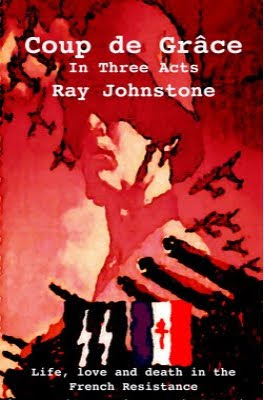 “Coup de Grace In Three Acts” is an adaptation of my novel “Coup de Grace”, but in this version, many changes have been made.

I only realized afterwards, that once you take a hatchet to a novel with the intention of removing large chunks of it, there are many unforeseeable consequences. For one, the story went off in a different direction, and this required the elimination of several major and minor characters who appear in the novel, as well as many of the incidents that I had used in an attempt to create the ‘spirit of place’ in France before, during and after the two World Wars. However, when this was done, some holes were left in the narrative, and I immediately saw that I now needed to add several scenes and introduce a few new characters, both for continuity and to propel the story forward. The end result is that “Coup de Grace In Three Acts” now has a completely different denouement from the one in the novel.
Although this book is essentially a film script, it is presented in a format that will make it easily accessable (and I hope enjoyable) by the everyday reader – and not in the strict format that is required by those associated by the movie industry.

Please don’t hesitate to contact me if you have any queries:
ray@johnstonesinfrance.com
Posted by Ray Johnstone at 12:13 No comments: 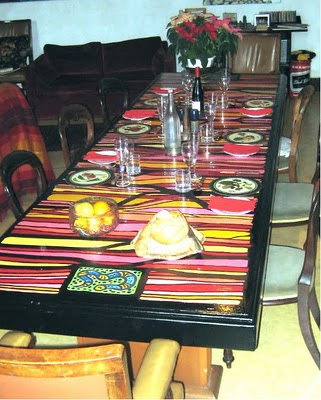 Here's the answer to the question on my last posting:
As you can see, it's simply a dining table. In this case it's set for six, but the table actually sits double that number.
I bought it for a few dollars a long time ago in Port Melbourne, and I repaint the surface every few years or so.
Posted by Ray Johnstone at 11:24 1 comment:

WHAT? ABSTRACT ART? AFTER ALL YOU'VE SAID ABOUT IT? 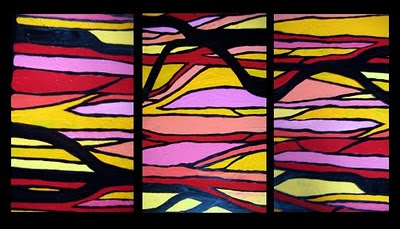 Well, the first question is: What is it?
Is is a bird?
Is it a plane?
Is it...well, what do you think?
Let me know.
ray@johnstonesinfrance.com
I'll publish the answer soon - when I've taken a decent photo.
Posted by Ray Johnstone at 15:21 No comments: 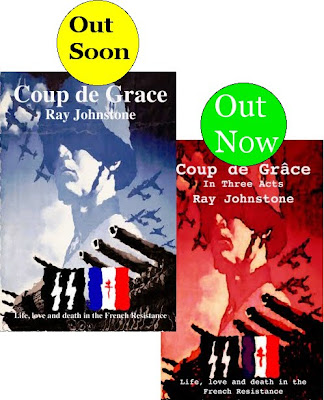 Book publishers certainly work in weird and wonderful ways.
Here is a prime example:
My novel, "Coup de Grace", which I've been working on for almost ten years,
has been with the publisher/printer since March.
My screenplay version, "Coup de Grace In Three Acts", has been with the same printer/publisher since October.
Guess which one has been printed first?
You got it.
The second book is available NOW. The first book will be available SOON.
You can get further information at Amazon and Barnes & Noble.
Please type in these full details on either site:
"Coup de Grace in Three Acts Ray Johnstone"
Both books will be available from other internet booksellers in due course.
***
Please note that these books are not for everyone. Why?
Please check why on my October 2009 blog posting in the list on the right hand side of this page.
Posted by Ray Johnstone at 14:31 No comments: