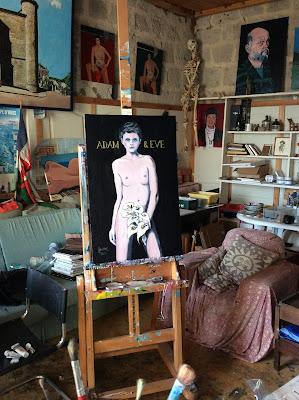 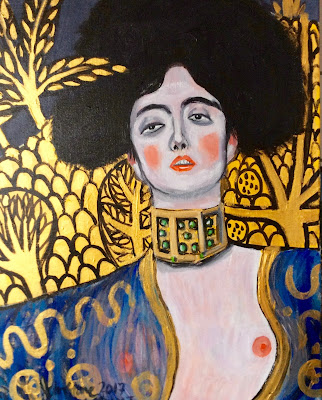 This is my painting of part of a painting called Judith with the Head of Holofernes. I’ve left out the head she’s holding but you can see it in the original which was done by Gustave Klimt in 1901. This was a very popular subject in the Renaissance and Baroque periods. Judith was a biblical character who tricked her lover and adversary into getting drunk so she could behead him.  Klimt used a lot of actual gold foil - I’ve used gold acrylic pigment.
This work is sold, but if you’d like a quote on a similar copy, please send me some brief details in an  email: ray@johnstonesinfrance.com. (A price guide is 300 Euros for acrylic on canvas size 50 x 60 cms.)
If you’d like to see some more of my works, please have a look at my portfolio at Saatchi Online.
Posted by Ray Johnstone at 21:12 No comments: 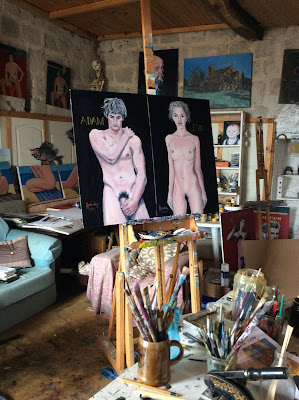 This is Adam & Eve in my studio.
I’ve been painting nudes all my life, and I’ve now gone back to this traditional subject with some enthusiasm.
You can see various of my nude works at Saatchi Online here.
But please don’t go there if the subject offends you.
Posted by Ray Johnstone at 14:04 No comments: 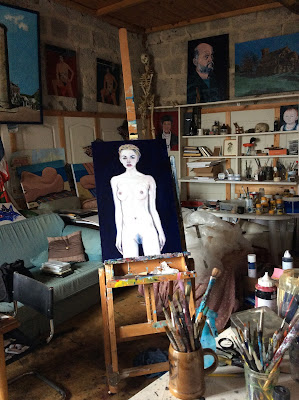 This is Ève. She’s in my studio.
But why the accent?
Because she was painted in France.
So I’m back to painting nudes, and, as Adam and Ève have been a popular subject for artists since the middle ages, here’s my version.
But where’s Adam?
He’s still in my head. He’ll join Ève later, as soon as he’s finished.
Watch this space.
You can see Ève in detail in a close up version at Saatchi Online by clicking here.
If you don’t like nudes, don’t go there.
Posted by Ray Johnstone at 08:53 No comments: 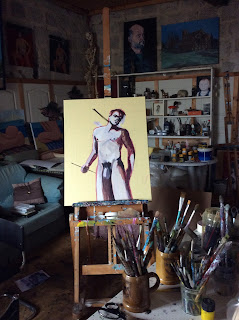 I chose the French title because, as some of you may remember, I live in France.
Saint Sebastien’s martyrdom has been a popular subject in art and literature since the middle ages. Before that, in Greek and Roman times, he was usually painted as Eros or Cupid. The subject was especially popular in the Renaissance when the rise of humanism, and a ‘rediscovery’ of classicism, saw the human body become increasingly central in paintings and sculpture.
So, why did I paint him?
Well, I’ve always painted the nude (many, many years ago I came close to getting into lots of trouble for a nude female I exhibited in Pretoria—it was based on Courbet’s L'Origine du monde.)
Anyway, I’ve gone back to the nude, and intend to paint several contemporary interpretations of traditional subjects over the next few months.
The above pic shows a work in progress. If you’d like to see the finished painting, and, as long as you are not offended by nudity, you can see it here:

Posted by Ray Johnstone at 14:51 No comments: