VIEW OF MEZIN FROM A LONDON KITCHEN 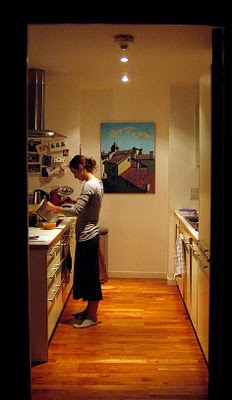 This is a photo of Mary (as in Lucas and Mary) cooking dinner in her/their kitchen in London. On the wall behind her is my painting of Mezin. She's preparing a 3 sausage and white bean Italian stew and butternut squash and roasted red pepper with chilli soup. If she turns round she'll see a view of Mezin from my studio window, looking out across the rooftops towards the magnificent St Jean-Baptiste.
You can see more of my paintings of Mezin by going to:

PROBLEMS WITH THE LITTLE RED BOOK 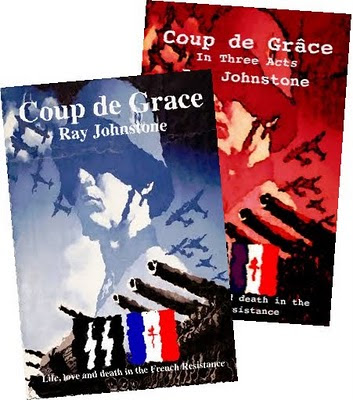 Unfortunately there are several typos and spelling errors in my Little Red Book, Coup de Grace in Three Acts. These are in the process of being corrected and the second edition will be available shortly. I'll add a post to this blog as soon as it appears on Amazon.
My apologies for this, but anyone who has a copy should remember that the early copies of James Joyce's Ulysses were also plagued with printer errors and spelling mistakes. (The first edition of Ulysses contained over two thousand errors and as each subsequent edition attempted to correct these mistakes, it incorporated more of its own.) Needless to say these copies of the Joyce book have now become collectors' items, so we live in hope as far as my book is concerned.
Apropros absolutely nothing, Mao's Little Red Book was the most printed book in the twentieth century. An estimated 5-6 billion copies were distributed. When my Little Red Book gets close to this number I'll buy back any copies of my first edition that may be for sale.
There are no problems (as far as I know) with my novel Coup de Grace, (the blue one in the photo). It's very easy to find on any Amazon site - and in all countries around the world.
Posted by Ray Johnstone at 05:13 No comments: