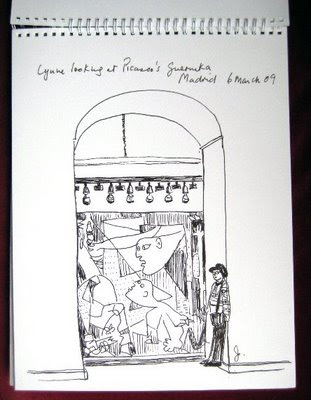 THE SIZE OF PAINTINGS YOU SEE IN BOOKS

In April 1937, during the Spanish Civil War, German bombers, allies of Franco's Nationialists, attacked the defenceless Basque city of Guernica. Hundreds of people, including many women and children were killed, and well over a thousand were injured.
Picasso painted his "Guernica" to commemorate the atrocity, and it was first exhibited at the Paris World's Fair. This huge painting has subsequently become a potent and international anti war statement.

For most of us, our main access to world art is via pictures in a book or images on the internet.
Every now and again, when I've been lucky enough to see certain original paintings in a gallery, I've been amazed to find that the size of one or other of the well-known works is nothing like I had imagined it to be.
For example, for some reason or other, I had always imagined that "The Garden of Earthly Delights", the triptych by Hieronymus Bosch, was enormous. But when I saw it in the Prado a few years ago, I was surprised to see that it measures only 220 cms x 389 cms.

On the other hand I could never imagine the size of "Guernica", and it's rare to see a photo of the painting that includes anything to help one to deduce the scale. (Like a figure looking at it, for example).
During his lifetime, Picasso insisted that "Guernica" could be displayed in Spain only once Franco had been ousted and freedom was restored to the country. The painting is now at the wonderful Reina Sophia in Madrid. It measures an enormous 3.5 metres by 7.8 metres, and in the above sketch of Lynne standing at one of the entrances to the special room where it's on display, I've tried to give an idea of its impressive size.
Posted by Ray Johnstone at 21:05