WHAT? A MAN SITTING ON A LAVATORY? IN THE MIDDLE OF THE PRADO? 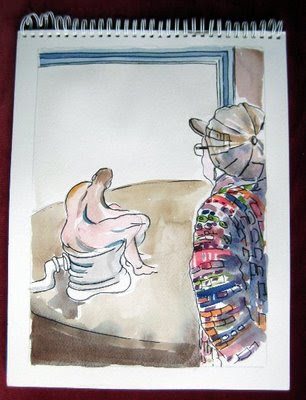 FRANCIS BACON AT THE PRADO

Many, many, many years ago, when I was young and innocent, I first saw Fancis Bacon's work at the Tate in London.
(Which Tate? There was only one Tate in 1962).
It consisted of a range of paintings based on various interpretations of Velasquez's Pope Innocent X.
It was like getting hit on the head with a brick. I'd never seen anything like them. I was overawed. And I've remained in that state ever since, whenever I see a Bacon painting.

Anyway, because we missed the Bacon exhibition at the Tate last year (and now that there are two, I mean the Tate Modern) we decided to go to Madrid, (which is much closer for us than London) to see the exhibition at the Prado.
Nothing much has changed as far as his paintings are concerned. Almost everyone these days knows Bacon's work and most people have seen photographs of his paintings. But when I see them, it's still just like getting hit on the head with a brick.

The ink and wash sketch above is of Lynne in the Prado contemplating the triptych "Three Figures in a Room". The left hand panel shows a nude man sitting on a toilet. It was completed in 1964. And it still has overwhelming impact.

Please email me if you disagree.
ray@johnstonesinfrance.com
Posted by Ray Johnstone at 12:56