ST JEAN-BAPTISTE - A GOTHIC MARVEL ON THE ROAD TO COMPOSTELLE 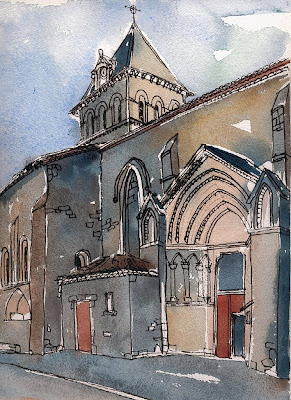 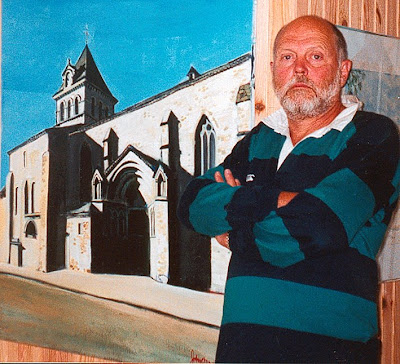 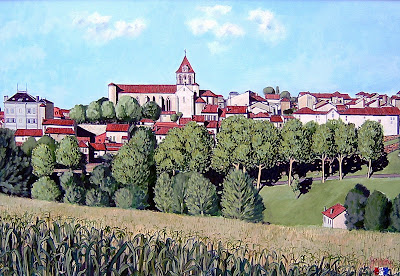 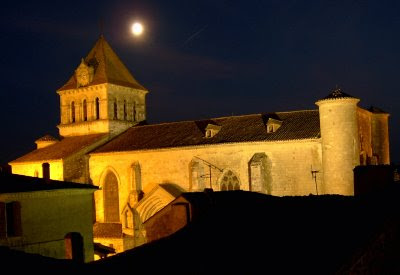 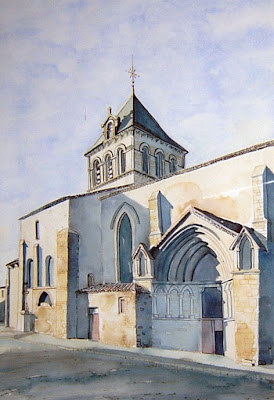 The 12th century church of St Jean-Baptiste, which is only a hundred metres or so from our front door, still dominates the village - just as it did in the Middle Ages.
It is estimated that about a third (some say more) of France's religious treasures were destroyed during the French Revolution. This is true too about the church in Mezin, but you can still see a statue of Saint-Jacques (the patron saint of pilgrims) in the Pilgrim Chapel (found when repairs were being carried out a few years ago) and a stained glass window showing Salome about to decapitate Saint John. Look for it above the west front door.
In the painting of Mezin I did from a nearby hill you can see how the church towers over the surrounding houses. The view from the bell tower is simply stupendous. On a good, clear day, if you stand on your toes, you can just see the Sydney Opera House in the far, far distance.
The other paintings are watercolours and an acrylic of the north door - the happy looking chap in the pic is me.
The photograph is a night shot from my third floor studio.

(Mezin is on the Pilgrim Path to Santiago - also know as El Camino in Spanish, or Les Chemins de Saint-Jacques de Compostelle in French - and I intend to publish some details on the pilgrim walk in a future blog. Keep your eyes peeled).
Posted by Ray Johnstone at 06:55