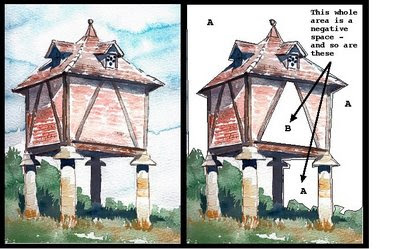 When you look at anything, your eye sends your brain a complex series of messages which allow you to cope with your environment. The picture you see in your mind is composed of positive and negative areas. The positives are usually objects, such as a bowl of fruit and a book on a table situated next to a wall within a room, and the negatives are the spaces around these objects, such as the areas which separate the fruit, the shape between the bowl of fruit and the edge of the table and the distance the table is from the wall and where the wall joins the floor and the ceiling.

Remember that you are translating three dimensions into two dimensions. Where, in reality the objects you are drawing take up space, on your paper they become flat areas or shapes. This means that your drawing will appear more accurate and convincing if you look carefully at - and are able to translate faithfully onto the paper - the relationships between the components of your picture. This means both the positive shapes (the objects) and the negative spaces around them.

In the example of the PIGEONNIER above, in order to get the shape of the roof, the sides and the pylons it rests on as accurately as possible, you have to look at the negative shape of the sky in the areas marked (A) - and the shape of the brickwork in area (B) when you are drawing the positive outlines that make up the building.

The object of the exercise is to evaluate as accurately as possible the relationships between all the objects you are drawing and to transfer them onto your paper as exactly as possible.

These relationships lead on to composition.
Posted by Ray Johnstone at 16:52