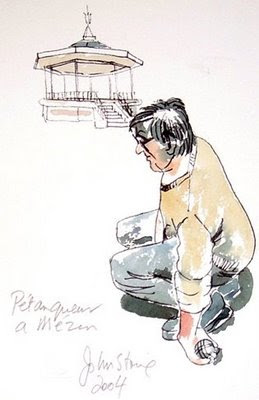 The days are hot, the grapes are ripening, and there are sunflowers everywhere. In the square, you’ll hear the crack of iron balls – the daily game of petanque is in full swing. At the bar, some customers seek refuge from the sun and enjoy a pression in the shelter of the medieval arcades. The more adventurous are sipping an apero en plein soleil on the terrace while watching the colourful country produce market that comes to the village twice a week. This is Gascony in midsummer, and the village is Mezin. Some call it la France profonde, but I prefer “secret France” because this is the France you won’t find in any tourist books. It certainly is a haven of peace and tranquillity – even at the height of the tourist season.
It’s some of these evocative sights and scenes that I tried to capture on canvas in an exhibition ‘Le Village en Ete’ I had in the Tourist Office a few years ago. The subject of the paintings was summer in Gascony: sunflowers, pigeonniers, petanqueurs and some of the most beautiful villages in France.
Some paintings show the colourful village characters who play, watch and comment on the game, the petanqueurs and their skills. When I play petanque (which I do most afternoons), I always feel that everyone of the players could be from Central Casting on their way to shoot a scene for a Monsieur Hulot film. And I love them all.
In this area, pigeonniers literally pepper the countryside, and I’ve done quite a few paintings of these strange and beautiful buildings that in days gone by were a symbol of status and wealth.
Several of these paintings are now on show at La Petite Galerie in Mezin (47170), a medieval hilltop village in FRANCE. It’s where Lynne and I have made our home, and it’s like living in Paradise. I hope I’ve captured some of this atmosphere in my paintings.
You can see a few of them at
www.johnstonesinfrance.com
Posted by Ray Johnstone at 15:25