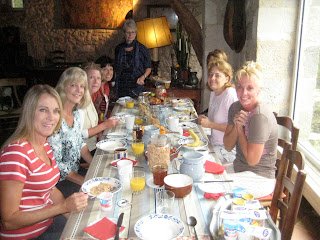 Breakfast at the Mill 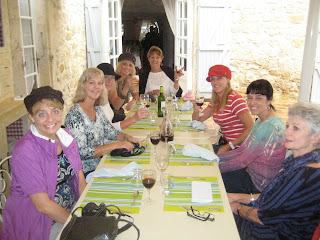 First, just after breakfast,  there was a compulsory forced march to Mezin market. We'd been told that it was flat as a tack most of the way (guess who said this).  But the truth is that the walk up the last few hundred metres to Mezin is the equivalent of the final stages of the ascent of Everest (now guess who said this).

Most of us, as you can see, found things to buy at the Sunday morning market (especially hats).

Then it was off to a specialist duck restaurant for Sunday lunch wearing our new hats. Most people had - guess what?
Quite right: duck salad or duck jerky or duck magret or duck confit or duck dessert (just joking most people had creme brulee for afters).