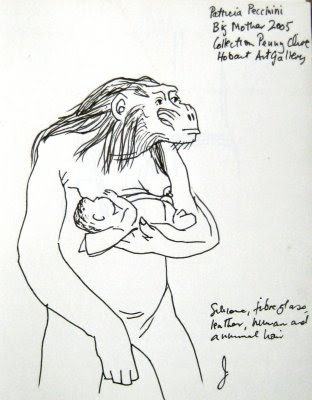 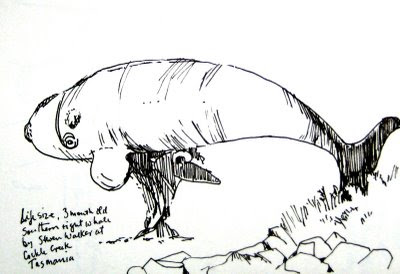 I live in France.
I flew to Tasmania with Lynne in April 2009. It took two days. I nearly died of jet-lag.

French Admiral Bruny d'Entrecasteaux left Brest in September 1791 to look for missing French explorer La Perouse.
Off the coast of Van Diemensland the French fleet was hit by a storm and driven into an inlet which Bruny named Recherche Bay. It was April 1792. The voyage had taken OVER SIX months.

In his log he described Recherche Bay as "a lovely harbour at the end of the world."

We drove from Hobart to Cockle Creek on Recherche Bay which is as far south as you can go by road in Australia. Bruny was right. It's seriously lovely. A sign tells you that you are closer to Antartica than Cairns in Queensland.

We found a whale. It's life size and made out of bronze. A statue of a three month old Southern Right by Steven Walker.

In Hobart' National Gallery we found the statue of Big Mother by Patricia Peccinini, on loan from the Penny Clive collection. It's made out of silicone, fibreglass, leather, human and animal hair.

Unlike the French Admiral, I survived the trip, and we're now safely back in Mezin, France.
Posted by Ray Johnstone at 11:21