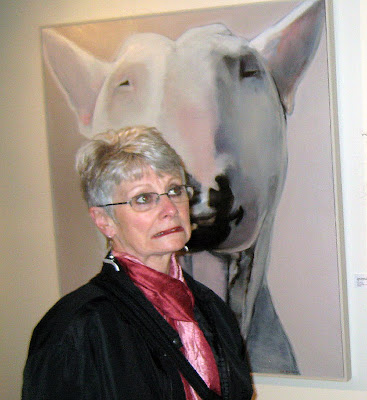 This is a photo taken at a Gallery in Tasmania. Lynne is scowling at something outside the shot – not the dogs, because we both liked Anne-Franc’s paintings very much indeed.
The reason this pic is here is because it shows how I feel when I see a Jackson Pollock or a Mark Rothko (especially a Mark Rothko) in an exhibition.
We saw a wonderful exhibition at the Guggenheim in Bilbao a few years ago. It was called 'Art in the USA - 300 Years of Innovation' and in many of the paintings you could see the obvious connection between late 19th Century and early 20th Century art in America and what was going on in Europe, especially the famous schools in Paris. In fact some of the American works looked as if they had been done by European artists, like the French impressionists, postimpressionists, fauves, etc.
Then we came around a corner into a more contemporary section and were astounded by the rubbish, including a tired old Mark Rothko.
Isn’t it about time we all started asking the question the kid asked of the Chinese emperor? Do these artists have anything? Or is their reputation the equivalent of the Emperor’s new clothes? For those of you who have forgotten the Hans Christian Anderson fable, here is a summary of the plot.
An emperor of a prosperous city who is infatuated with clothes hires two swindlers (in painting terms, critics, gallery owners, art journalists, but mainly collectors) who promise him the finest suit of clothes from the most beautiful cloth. This fabric, they tell him, is invisible to anyone who was either stupid or unfit for his position (in art terms us, and people like us who are too stupid to realize we’re being hoodwinked). The Emperor cannot see the (non-existent) cloth, (in our case we can’t see the poor quality art) but pretends that he can for fear of appearing stupid - his ministers do the same. (Just like us when we see a Pollock or a Rothko – we pretend that it’s great art). The Emperor then goes on a procession through the capital showing off his new "clothes" (just like galleries showing off their paintings). During the course of the procession, a small child cries out, "But he has nothing on!" The crowd realizes the child is telling the truth. (In art terms this moment of revelation would be like us coming to our collective senses and realizing that so many famous artists have no talent). The Emperor, however, holds his head high and continues the procession in the nude. (Just like us when we read about art, talk about it and pay good money to see it – but unfortunately there’s nothing there. Like the Emperor, these artists are naked in terms of talent).
So there! Is that provocative enough to start a debate?
Can anyone out there tell me what’s good about a Rothko?
Please contact me at:
ray@johnstonesinfrance.com
Posted by Ray Johnstone at 06:38