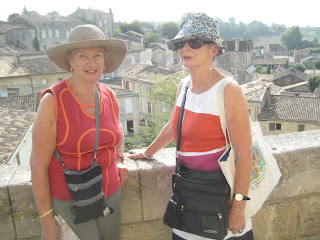 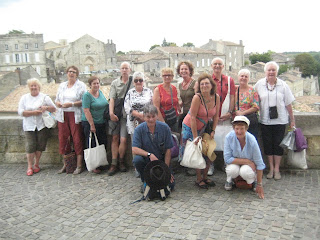 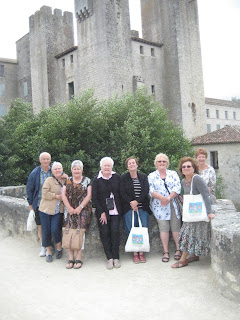 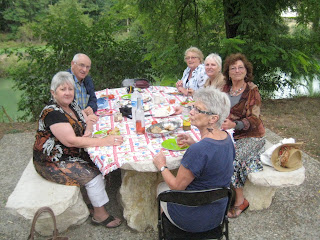 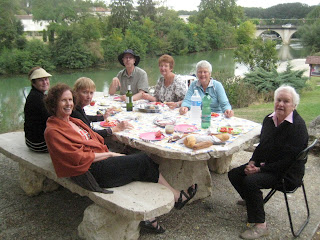 The great cité medieval of Saint-Emilion is in the Gironde just north east of Bordeaux. The whole town is classified a World Heritage site. The Romans planted the vineyards in the 2nd century. It's a simply wonderful place to visit. Here are some pics of our day trip: Lynne and Lynne and a team shot looking out over the rooftops.
Barbaste is Henri IV's fortified mill that exported flour to French possessions in the Caribbean in the middle ages.
And a picnic on the river at Lavardac.

Here's some stuff for history buffs:
When Eleanor of Aquitaine married Henry Plantagenet (later Henry II of England), Saint-Emilion became part of England. The town changed hands repeatedly in the course of the Hundred Years' War until 1453 when it became French permanently.
Saint-Emilion produces only red wine.

Now here's a bit for wine buffs:
As most of its wine is based primarily on Merlot, St-Emilion wines are described as having finesse and elegance. The best wine of the region can last upward of 10-20 years and many find that the wines here mature earlier than those based on Cabernet Sauvignon. The soils in the area differ greatly, from gravel to limestone to clay and sand. As a result, the wines of this region are diverse. Quality wines display silky tannins and ripe, soft fruit – the higher quality wine showing full-bodied texture and layers of complexity.
So there you have it.