For several years now, I have been using photographs as an adjunct to painting portraits.
It solves all kinds of practical problems.
For example: time.
A quick snap and the model’s involvement is over. And who these days has the time to sit in front of the artist for hours — or even days —  of dreary posing?

BUT HANG ON, IS THE CAMERA A LEGITIMATE TOOL FOR ARTISTS?
Well, there’s always been this nagging doubt teasing away in the back of my mind. And then one day a visitor to my gallery bluntly posed the question critique: “Isn’t using photos a bit sneaky. You know, a kind of cheating?”
So I did some research.
A quick troll through the web revealed some interesting insights.
Throughout time, artists have used mechanical devices.
For example hand stencils were used on aboriginal rock art and palm and fingerprints on Paleolithic cave paintings.

EXAMPLES FROM WESTERN ART
The Egyptians, Greeks, Romans and many other early civilizations all used geometric instruments to develop their theories, architecture and art, and by the time of the late Gothic period, mechanical devices were being used almost universally.
The physicists Falco and artist Hockney recently published their theory that admirably demonstrates that advances in realism and accuracy during the Renaissance were achieved with curved mirrors, and devices like the camera obscura and the camera lucida. Their studies focused on artists like Vermeer, Jan Van Eyck, Caravaggio, and others. (I should hasten to add, however, that all this is not to say that countless great artists achieved amazing realism without resorting to mechanical and optical aids.)

MORE CONTEMPORARY EXAMPLES
Jump to the twentieth century and countless artists were in on the act — widespread use of contemporary technology like slide projectors and computers is now commonplace amongst serious artists.
Pop sculptor Donald Judd had all of his work commercially produced from his sketches by artisans who were experts in various phases of metalwork. Needless to say this was not new, and sculptors have always used foundries (invariably factories producing commercial metal objects in large quantities) where experts carry out the preparation of moulds, etc, and the highly technical aspects of the actual casting, and the artist, once he has created his design, merely (if that’s the word) oversees the project.
Andy Warhol emphasized the point of artists being involved in certain of their work at arms length by calling his New Your studio The Factory and his huge silkscreen works now attract huge prices for works that are, essentially, silkscreen prints produced by an army of helpers in the same manner as much commercial colour printing was done at that time.
Jeff Koons’s work is a variation on this theme using a huge staff that he supervises. But the concept, known as art fabrication, is taken several steps further. Koons has access to specialized machinery, technicians and the experienced staff necessary to execute particularly complex projects. Under his direction, all kinds of designs are created and then produced in a wide variety of factories.
Hockney himself has used photography and computers widely in his work and even when Paris was the centre of the art world, Picasso and other cubists stuck photographs onto their collages.

CONCLUSION
So, what’s the conclusion? Well, if anyone’s still reading this stuff, you may be wondering where it’s going so I’ll get to the point.
All I want to say, can be said in one sentence: if artists like Vermeer, Hockney, Warhol et al, can use mechanical aids, so can I. I feel it’s quite legitimate for me to use a photograph from which to paint a portrait. And that’s it really – end of diatribe.
Well almost, because, finally, here’s an example of what I’m getting at. Adrian is an old friend who turned seventy recently. I wanted to paint his portrait as a surprise, so I found and downloaded a photograph from a directory of London QC’s.
This is the result.
If you are interested in having your portrait painted from a photograph, please send me an email. 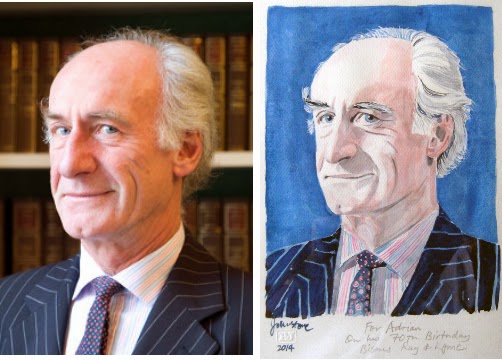