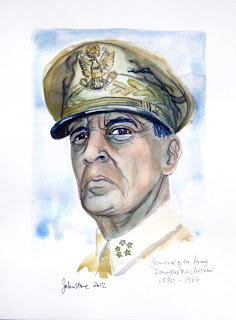 For no reason I can think of - other than he has an interesting face - I did this portrait of General Douglas MacArthur recently.

Then I found an extract of an interview with President Truman that says it all.

I fired him because he wouldn't respect the authority of the President. I didn't fire him because he was a dumb son of a bitch, although he was, but that's not against the law for generals. If it was, half to three-quarters of them would be in jail.

MacArthur was always playacting.... He was wearing those damn sunglasses of his and a shirt that was unbuttoned and a cap that had a lot of hardware. I never did understand, an old man like that [MacArthur was 70] and a five-star general to boot, and he went around dressed up like a nineteen-year-old second lieutenant.
Posted by Ray Johnstone at 09:51