ANATOMY OF A PAINTING - 3 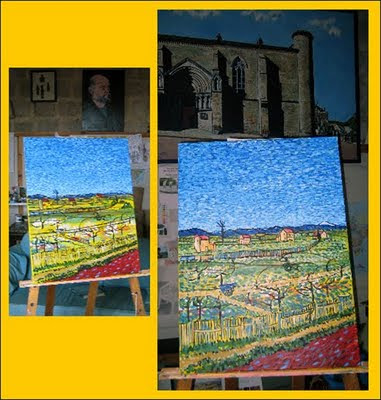 As you can see from these photos, if you choose to paint using a this kind of impressionist style (well, historically speaking, Van Gogh was a post impressionist, I suppose), but, anyway, in either style, the canvas is covered with several layers of small brush strokes. The French called it pointillism, and we now use that word too. These points of usually very pure paint (i.e. unmixed with other colours) juxtaposed next to each other create a shimmering visual effect. Without bashing you over the head with too much colour theory, this is partly because your eyes are 'mixing' the colours in your brain to blend the colours and this causes the mild dazzle.
In the first photo above, I have repainted the compositional outlines that I had originally done in pencil. And in the second, the end colours are taking over from those in the underpainting.
So now it's starting to look like the Van Gogh original. But still not much sign of peach blossom.
And there's quite a bit to do still, so keep watching this space.
A tout a l'heure.
Posted by Ray Johnstone at 08:14