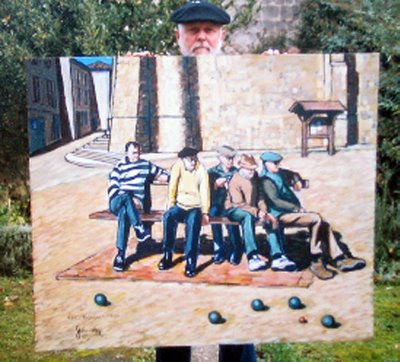 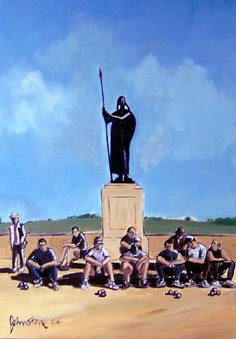 ANSWER: THE MOST IMPORTANT THING IN FRANCE

Raucous laughter, shouted insults and the crack of iron balls tells you that the daily game of petanque is on at the Place du Club just behind the Church of St Jean Baptiste.
Nothing stops this ritual. The old timers tell me that they even played in snow in the old days.
Monsieur le Maire, the mayor - a very important person in a French village - was quite confused when I told him recently that petanque was the most important event in the village - more important than the church, the bar, the library, the school, the hunt - and even more important than what goes on in the marie.
Well, I'm not going to try to explain how petanque is played. Forget about my playing skills, but I certainly don't have the writing skills to know where to start.
Lynne says it's like watching grass grow, but that's only her opinion - and an ill advised one at that. It may look a simple game, but it's far more complicated and intricate than a combination of chess, go and bridge.
According to Wiki, petanque is played by 17 million people in France. All ages play, and so do all sizes.
And I'm happy to proclaim that one of them, and I play every day.

The painting I'm holding is called "La Gallerie". It belongs to Mark and Sara Forster. The old codgers on the bench consider themselves connoisseurs of the game. Although they almost never play, they spend their days criticising, advising, ridiculing and occasionally complimenting the players.
The other painting is a group of petanqueurs, sitting on the steps of the Monument aux Morts, waiting to play.
For further information on these paintings please go to:
ray@johnstonesinfrance.com
Posted by Ray Johnstone at 10:39