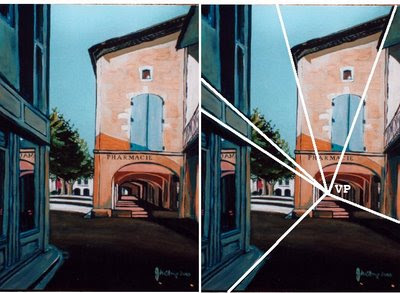 Creating space in a picture

One of the most powerful components in a picture is perspective.

The theory of geometrc perspective was refined in the Renaissance - today it is usually used as a means of creating a convincing feeling of ‘correct distance’ or space within a two dimensional work of art. It relies on the visual impression that parallel lines appear to meet - as where a road leading towards the horizon seems to disappear at a certain point. In theory, if you look carefully at whatever you are drawing or painting, and if you accurately transpose what you see within the picture plane, the result should be the same as creating the composition using geometric perspective.

The size of objects and the visual impression created as they appear to decrease in size with distance will also generate a feeling of space. This means that larger objects within the composition appear to be closer to the picture plane than similar smaller objects.

Overlapping also gives a feeling of space as it enhances the idea that one object is behind another.

The concept of atmospheric perspective is often used to create a feeling of depth within a picture, and clearly defined objects will appear to be closer to the viewer than those that are less well defined.

A feeling of distance and depth can also be produced with colour because of their psychological and visual properties. Warm, stronger colours will appear closer to the picture plane whereas, cooler colours will have a tendency to recede from the viewer.

In my painting of the nearby village of Sos, you can see that the lines on the edges of the architechture all seem to meet at the VP or vanishing point.

But my advice to students is to forget all this theory and try to paint what you see as accurately as possible. The results will be the same.
Posted by Ray Johnstone at 21:37