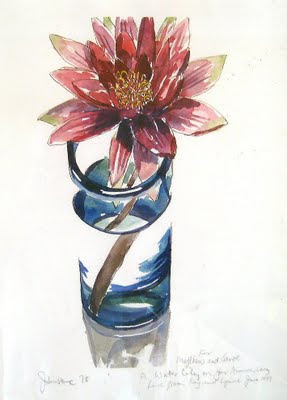 He was one of the founders of Impressionism, and, as Post Impressionist Cezanne is said to have said: “Monet is only an eye, but my God what an eye.”

In his later life, Monet painted a series of approximately 250 paintings of water lilies, some of them huge, and in 2008 one of these paintings, “Le bassin aux nympheas”, sold for almost £41 million at Christie's in London.

More’s the pity then that his waterlilies have, for me, been debased and turned into the most boring paintings ever created. This is probably due to their gross over exposure and commercialization. In gift and souvenir shops they’re everywhere. One finds them on Christmas cards, place mats, coasters, calendars, diaries, prints, mugs, posters, aprons, T shirts, wallpaper and, no doubt, underpants.

Where are all these rambling thoughts going, you’re no doubt wondering?

Well, there is a connection.

We went to see Monet’s supplier of water plants – Latour-Marliac - at the nearby village of Le Temple-sur-Lot.

It’s a great place to visit and the historic connection to the famous Impressionist is impressive.

You’ll see copies of Monet’s invoices, a replica of his Japanese bridge at Giverny, and of course, millions of water lilies.

Then there’s a giant Amazonian water lily. This species was named after Queen Victoria when the first European grown specimen was given to her. It only flowers at night and the leaf reaches 1.5 meters in diameter.
There are examples of Tintin’s Blue Nile lotus, a pool of fabulously coloured Kois or Japanese carp, and a large bamboo collection.

I managed to do a quick sketch of a huge water lily, but pen and ink doesn’t do justice to these delicately coloured flowers, and I was rather disappointed.

Then I remembered that several years ago, I had also painted a water lily. It’s at the top of this page and it went to London as an anniversary gift.

If it reminds anyone of Monet’s water lilies, and if you ask, I’ll do another one for a lot less than 41 million – euros or pounds.

For more on my flower paintings please go to:
rayjohnstone.co.uk
Posted by Ray Johnstone at 07:50 1 comment: 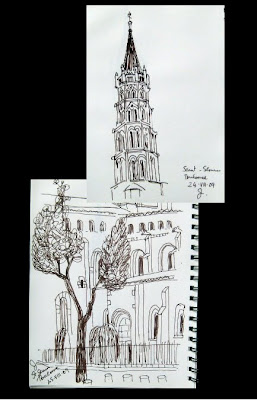 The great Romanesque Basilica in Toulouse is well worth a visit weather you are a believer or not.
It was built in the 11 century partly in honour of the saint (who was martyred in the year 250 when he was dragged through the streets by a bull) but also because of the rise in numbers of pilgrims who were on their way to Compostela on the Via Toulousana.
It is the largest romanesque church in the world and a monument to the technical skills of the masons and architects of the middle ages who designed, planned and built this magnificient building.
The picture shows the problem I had getting the slightly leaning octagonal Toulousian tower and the nave and crossing onto one page. Eventually I gave up and did them on two pages which are shown here together.
Posted by Ray Johnstone at 09:42 No comments:

PAINTING ONE OF THE MOST BEAUTIFUL VILLAGES IN FRANCE 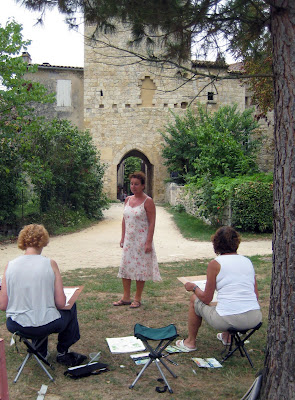 Fources is an unusual village.
Firstly it is amazingly beautiful. But it's also a round bastide.
Whereas bastides - or fortified villages - are usually square or rectangular - Fources is round.
In April it becomes even more beautiful when the Fources Flower Show swamps the whole village in spectacular floral colour.
Anyway, as Thijs and Jan were still away on their walk in Spain, the ladies decided to give jam making a break, and to take time off to paint again.
So here are Anje, Ineke and Jose doing a water colour painting of the medieval tower and gateway that leads into Fources.
Another watercolour souvenir to take back to Holland.
If you'd like details about painting at Fources, please send me an email at:
ray@johnstonesinfrance.com
Posted by Ray Johnstone at 14:21 No comments:

THE THINGS THAT HAPPEN WHILE CLEANING BRUSHES 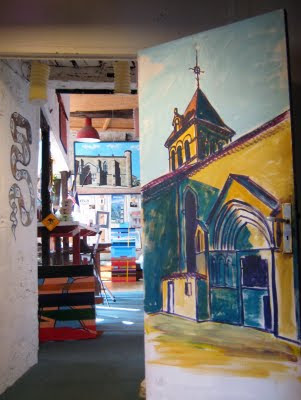 My studio at La Petite Galerie is on the third floor of our house which was built in the 12th century - at the same time that the wonderful church of St Jean-Baptiste was started in the middle of the village.
There is a great view of this gothic marvel from my studio window, and I've painted it many times.
When we first moved into Mézin about ten years ago, when I was working on a painting on canvas, for some unaccountable reason I started cleaning some excess blue paint off my brush onto the door leading from the top landing into my studio. Then when I'd finished with another colour, yelllow ochre, that went onto the door too. Then something caught my fancy in what was a bit of a mess on the wooden panel. Luckily I was able to turn it into a coloured sketch of St Jean-Baptiste. (Lynne still thinks it's a bit of a mess, but I've grown to quite like it - and it certainly avoided a wanton waste of paint).
You can see other versions of the church in Mézin by clicking on the link below. Then go to "French Paintings."
rayjohnstone.co.uk
Posted by Ray Johnstone at 19:23 No comments:

EACH TO THEIR OWN 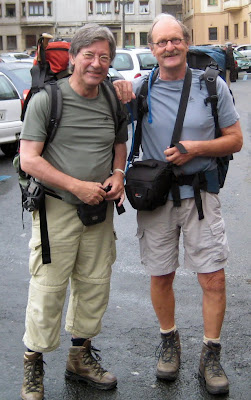 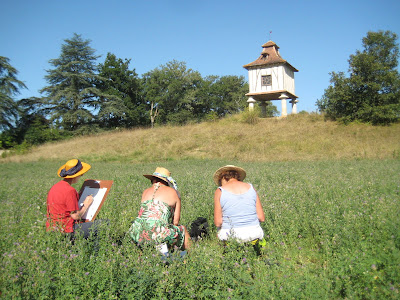 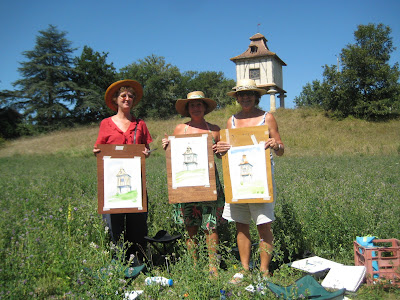 PILGRIMS AND ARTISTS FROM HOLLAND

Some chose to walk. Some chose to paint.
Those that wanted to walk, had walked many times before. To Compostella. But this time they wanted to take the coastal path. So we took Thijs and Jan to Irun in Spain to get them started. It will take them two weeks, walking about 20 to 25 kilometres each day.
While the men are having a good time, the ladies wanted to paint a pigeonnier.
So first we found one we liked, then we walked across a field of lucerne until we had a good view.
Then we started drawing and painting. And a few hours later José, Anje and Ineke all had a pigeonnier to take home from Mézin as a souvenir.
Posted by Ray Johnstone at 14:41 No comments:

A CARD FOR IRVING 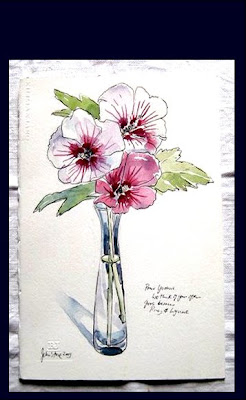 A POEM FOR YVONNE

Remember me when I am gone away,
Gone far away into the silent land;
When you can no more hold me by the hand,
Nor I half turn to go yet turning stay.
Remember me when no more day by day
You tell me of our future that you planned:
Only remember me; you understand
It will be late to counsel then or pray.
Yet if you should forget me for a while
And afterwards remember, do not grieve:
For if the darkness and corruption leave
A vestige of the thoughts that once I had,
Better by far that you should forget and smile
Than that you should remember and be sad.

SNAKES IN THE BATHROOM

Forget about the the King Brown, the Taipan, the Copperhead or the Death Adder, these days most Australians agree that their most dangerous viper is the One Eyed Trouser Snake. I think it was Phillip Adams who coined the phrase (or it may have been Barry Humphries), however, as some people reading this blog might be of a tender age, I'm not going to elaborate on this subject.
Rather I'm just going to show you one of the ensuite bathrooms in our house.
For some reason I can't explain, when Lynne left me alone for a few days and went off to visit her mother, I painted snakes all over the walls.
She hates them, but most kids love them.
But I must admit that some adults come back from using the toilet (bathroom in America) with puzzled looks on their faces.
What do you think? Not about the bathroom - what's the most dangerous snake in the world?
If you want to see a painting of an Australian snake on canvas, click on the link below:
rayjohnstone.co.uk
Posted by Ray Johnstone at 12:08 1 comment: