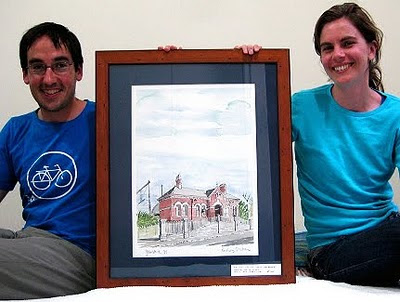 This is Henry and Joey. They live in Australia. And that's one of my paintings between them. It's of a red brick railway station on the Melbourne suburban network.
I painted a lot of buildings when I was in Australia, and one of them even won a prize in 1997 - the Applied Chemicals International Acquisitive Prize for a watercolour of a Victorian factory building in Melbourne.
But I didn't win a prize in South Africa when one of my large nudes in a Pretoria University exhibition created a controversy. A screen had to be erected around the painting to prevent it being seen by the South African Prime Minister John Vorster who was visiting the uni. I always had trouble working out whether this display of bigoted Calvanism was because he'd never seen a nude women or because he didn't like to see women in the nude.
However, this kind of silly narrow mindedness was not unique to South Africa, and when I worked at Myer in Melbourne in the 1980's, a copy of Michelangelo's David on display in one of their windows had to have a fig leaf applied to hide his genitals before he was considered sartorially acceptable.
Anyway there's nothing controvercial about railway stations so Joey and Henry won't be needing any screens or fig leaves (I hope).
Posted by Ray Johnstone at 18:25 No comments:

ANATOMY OF A PAINTING - 4 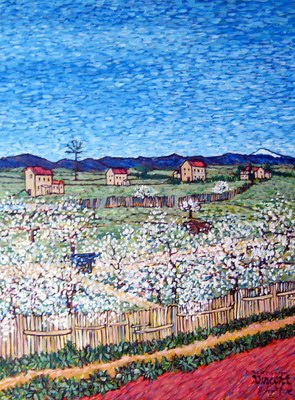 This is Heather's Van Gogh just before a few last touches and before applying the varnish. It's the last in this series on 'what goes into a painting'.
(En passant, painting in acrylic is like producing a painting in plastic - it is very durable, and after varnishing it should even survive a nuclear holocaust).
The next time you'll see this 'Vincent' copy will be when it's on Heather's wall. She's sending me a photograph and I'll post it as soon as it arrives.
'A +' as they say here to confuse the Anglo Saxons.
Posted by Ray Johnstone at 10:50 No comments:

ART AND THE MEDIA

One is fairly used to the popular press generating emotional and emotive headlines to deride and condemn art, artists and exhibitions. These cheap shots and easy laughs are part of how headlines are used to sell newspapers - and, more importantly, I believe that most readers understand that they're there for light relief - and to generate a 'bit of a laugh'.
It's all a matter of taste (and personal perspective), I suppose, but I believe that the other side of the coin is where more serious journalists produce what are presented as more thoughtful citicisms and reviews of artworks and artists who, in my opinion, are the equivalent of the emperor who wasn't wearing clothes.
During my ten years in France, I've written to the UK Guardian Weekly fairly regularly, and, someone there likes what I write because they've published eighteen of my letters to date. (I must admit here that any criticism of the Royal Family or Tony Blair gets in quite regularly).
'So what?', you're probably saying.
Well, the point is that they DIDN'T print a letter I wrote in a fit of exasperation after reading what their art reviewer wrote about a recent exhibition at the Royal Academy in London.
British Artist Anish Kapoor is a very well regarded British artist and it was his 'work' that was on show. This consisted of a 'train' with a 'canon' that the artist constructed to run on rails through several rooms in the gallery. The gun was used to fire a compound of sticky red material (crap?) that stuck on the walls and high ceilings. The result was, apparently, art.

Here's what I wrote to the Guardian Weekly:

SHAME ON KAPOOR, SEARLE AND THE R.A.

What on earth should we tell children, casual visitors or even art devotees who read the likes of Adrian Searle’s article on Anish Kapoor and then visit the Royal Academy?
That art criticism is just another form of fiction? Or that so much contemporary art is merely a very expensive game with taxpayers’ money? Or that journalists and artists - like bankers and politicians – have made an art form of taking the public for fools?
Perhaps the short answer is for them to be encouraged to read Hans Christian Anderson’s ‘The Emperor’s New Clothes’ before, during or after seeing the exhibition. In art terms, the moment of revelation - when the kid realizes that the emperor is naked - would be just like us coming to our collective senses and realizing that so many famous artists have no talent. And that when we read about art, talk about it and pay good money to get into exhibitions, quite often there’s simply nothing there.

What do you think?
All responses will be acknowledged - please write to me at:
ray@johnstonesinfrance.com
Posted by Ray Johnstone at 09:31 No comments: