CONDOM? IT'S A TOWN? YOU MUST BE KIDDING! 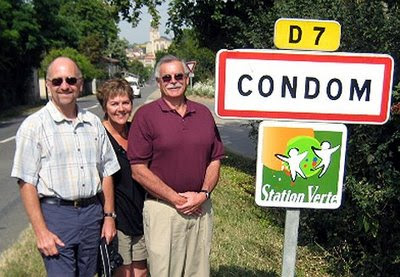 DON'T GO HOME WITHOUT ONE

"Why ze Inglish always take zeir photo next to ze Condom road sign?", asked Jacques, my petanque partner one day when we were playing boules in the village square behind the magnificient church of St Jean-Baptiste.

He's right of course, all our guests want to have their photos taken at a sign with "Condom" on it. But explaining this to Jacques proved quite a task. The word "condom" for a contraceptive is meaningless in French - they use "preservatif". And where the very pretty river port town of Condom gets its name from is a minor local mystery. Some say it is named after a duke who had that name. Others prefer a difficult etymological explanation to do with the town's location on a river and near a hill and a Latin word that encompasses all these concepts.

Condom boasts an Armagnac museum (more on Armagnac in a later blog), several good restaurants, and a wonderful cathedral that dominates the town.

If you'd like more information on art holidays at La Petite Galerie in south west France (and perhaps have your photograph taken at a Condom road sign) please send us an email.

ray@johnstonesinfrance.com
Posted by Ray Johnstone at 09:36