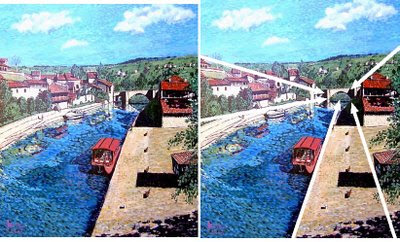 THE MAKINGS OF A PICTURE

Think about composition as a language used to discuss how a work of art is made up. Pictures are composed of various elements or components which, when considered together are known as composition.

When creating a picture, some artists have an intuitive sense of composition, some plan their compositions, and some will deliberately manipulate or change certain principles in order to achieve a specific result. What results at the end of these various processes is the composition of the work.

A simple way to think about balance in a composition is to imagine the picture on a scale - or with the fulcrum running down the middle - if your impression is one of harmony, with the elements, forms, colour, etc in the left half of the picture creating a feeling of being roughly equal to those in the right of the picture, or if the work has a feeling of alignment or symmetry, the work is considered to be in balance.

In most works of art, there is usually a focal point. This simply means the most important part of the painting, and the area where the eye is led by various components of the composition (and where the eye usually comes to rest) whether they be line, perspective, shape, form, colour, texture, etc. In the painting I did of the nearby village of Nerac (above) the eye is led by perspective lines towards the ARCH in the bridge, which is the focal point.

In some paintings, the eye is led very quickly from one point to another by their repetition of similar shapes or colours. This is known as rhythm.

The Golden Rule of composition is a theory that states that the most pleasing place for the focal point to be situated is approximately one third the way along an axis within the composition where the axis is one third from the edge of the work.
Posted by Ray Johnstone at 18:34