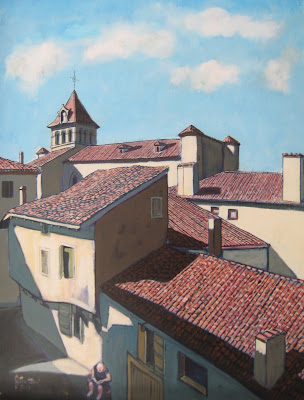 According to a French historian who visited us one day, our home in Mezin, La Petite Galerie, was built at about the same time as St Jean-Baptiste, the village church. Probably at the beginning of the 12th century. This makes them both about 800 years old. And it makes them both examples of ROMANESQUE architechure.
At the risk of seeming pedantic, the Romanesque period lasts from the middle of the 10th Century (around 930-975, depending on which part of Europe you are in) to the beginning of the 13th Century. Most guidebooks will provide those interested with the basic features to look for when identifying Romanesque church architecture: a central nave with isles, barrel vaulted roofs (on most early examples), the development of clearstory lighting (sometimes spelt "clerestory" just to confuse you) to light the nave, and the transition to the Gothic when the rounded arch (copied directly from Roman originals - as in Rome in the days of the Romans) became pointed (in order to more effectively overcome the problem of supporting the enormously heavy stone roofs).
When travelling in France, however, one needs to be careful about the English translation of the French word for "Romanesque", as it is often mistranslated.
In Britain, Romanesque is usually simply described as "Norman".
But in French the style is known as "Roman".
Unfortunately, this word is often incorrectly translated into English as "Roman", making English speakers think about the Roman Empire, a period at least a thousand years before the Romanesque period.
In French, the word for this period (when Charlton Heston was racing charriots around the Colluseum and where Christians were fighting lions when Charlton wasn't using it) is Romain.
The painting above is a view of St Jean-Baptiste from my studio window. The guy in the bottom foreground is the baker who bakes his bread in the Renaissance buliding (Wow! Now we're on to 15th Century domestic architecture) opposite La Petite Galerie. He's asleep on a bench outside his oven - because he's been hard at work baking since before midnight.
If you'd like to do a painting of a view form my studio window, please contact me at:
ray@johnstonesinfrance.com
(Click on "Contact Us").
Posted by Ray Johnstone at 16:02