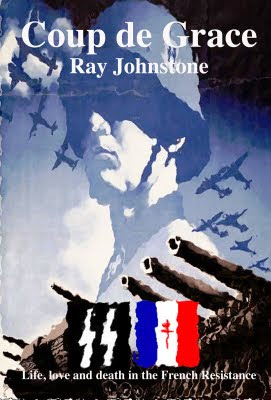 The printer has just notified me that the novel I've been working on for about ten years will be available shortly. (I'll post further information on how to get hold of it as soon as I have the specifics).
Above is the front cover that I designed, which as you can see, is based on a Nazi recruiting poster. I've added Charles de Gaulle's symbol of a free France, the Cross of Lorraine, which was used by the French Resistance - as well as an SS symbol, because the notorious German division Das Reich also plays an important part in the story.
WARNING:
This is not a book for everyone.
Coup de Grace is a book about war - and the dreadful, bloody and barbaric things that happen in war are presented in the bluntest manner.
Many of the characters express decidedly anti establishment views.
Strong language is common.
There are several graphic sexual scenes which may not be to everyone’s taste.
And the overall theme is decidedly and unashamedly anti war.
As I've said above, some people may have problems with this book, but for those of you who would like to make up your own minds, more information will be posted as soon as I have it.
Posted by Ray Johnstone at 10:42