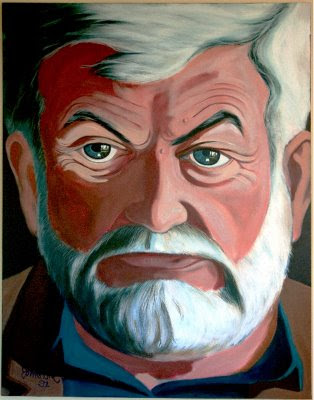 I have always considered American artist Chuck Close's portraits literally overwhelming, and inspired by these huge paintings, I started doing several quite large portraits of my own.
When I was living in Australia, Terry Lane came to our home in Frankston, and I did his portrait over several days.
Because I had no record of it, I asked him to email me a photograph. This is what came back: 'Herewith one fabulous portrait, much admired by everyone who comes to the house. Also effective burglar deterrent.'
At about the same time, I painted another Melbourne radio personality, Doug Aiton. He used it on the cover of a charity Christmas carols CD. When I went into our local record shop to get a copy, I had difficulty finding it amongst the mass of CD's.
But I was reassured by an assistant that they definitely had it in stock.
'I specifically remember checking it in', she told me, 'it's got this absolutely appalling portrait of Doug Aiton on the cover'.
Burglars can now see Terry Lane at:
rayjohnstone.co.uk
Posted by Ray Johnstone at 06:13