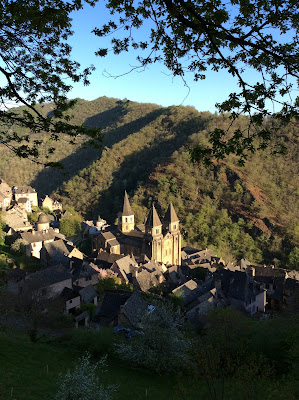 Today, the medieval village of Conques is a truly stupendous tourist destination - it's one of the larger jewels in the crown of European church architecture.
But this was not always so—a thousand years ago it was struggling to attract visitors. The monks had tried everything to attract pilgrims—without much success. Located in the middle of inaccessible, remote, and difficult country for travellers, something special was required.
Eventually their eyes turned to Agen Cathedral. It was lucky enough to have the relics of St Foy. She’d been making miracles and attracting hoards of visitors for years. Her statue could—amongst other pretty impressive feats—restore sight even when the victim’s eyes had been physically gouged out. 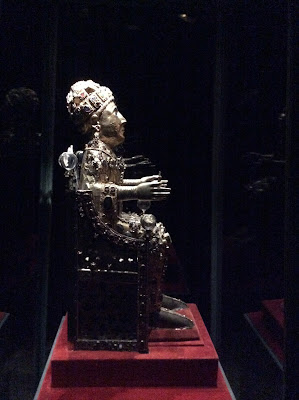 So a heist was planned. And, although it took an imposter monk 10 years to pull off, he eventually nicked it from Agen and took it to Conques.
Don’t miss her - she's on show in the trésor. Her statue, which contains her actual skull, is covered in gold foil and smothered in a profusion of precious stones. She is a seriously impressive sight.

Then there’s the stupendous tympanum—a marvel of medieval story telling. Christ in Glory is showing all the naughty people the way to hell. And he points the great and the good towards Paradise.
But wait! Isn’t that Charlemagne amongst the nice guys? Yes, there he is being led towards Christ by the Abbot. What? Has the sculptor just somehow forgotten his massacre of 4,500 people at Verden?
Or is it something to do with Charlemagne’s gift to Pope Leo III in return for being crowned Holy Roman Emperor? Nothing less than Christ’s foreskin. Or one of his foreskins anyway. Because, according to David Farley, a respected expert, there were between 8 and 18 of them.
But hang on! This could be leading us all astray. It’s meant to be an article about Conques. But Christ’s private bits seem to have hijacked the conversation. So perhaps it would be safer to stop right here.
Posted by Ray Johnstone at 09:21