After an exhausting day's shopping (and eating) at Sarlat we spent the afternoon at Beynac Castle. 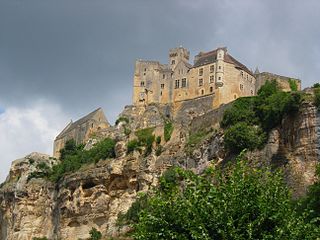 The castle was built from the 12th century by the barons of Beynac. 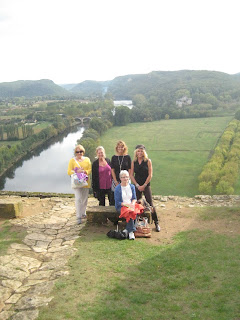 Here we are on the river side of the castle on top of the sheer cliff face that was sufficient to discourage any assault from this angle.
But the defences were built up all round with double crenellated walls and double moats. 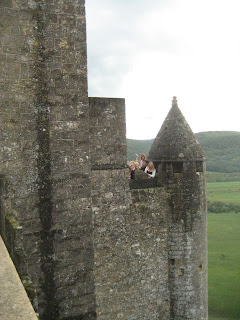 This area of the Dordogne saw numerous battles between the English and French which is why castles were built on both sides of the river which was the border between England and France in those days. 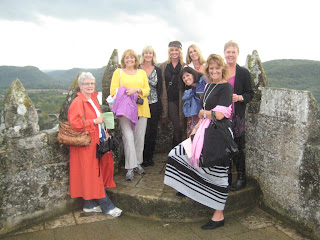 The oldest part of the castle is a large, square-shaped, Romanesque keep with vertical sides and few openings, held together with attached watch towers and equipped with a narrow spiral staircase terminating on a crenellated terrace which is where we are in these photos. 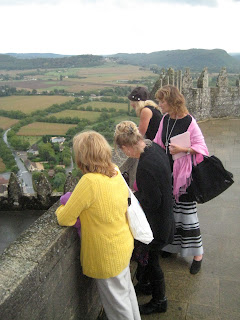 It sure as hell is a long way down.
At the time of the Hundred Year's War, the fortress at Beynac was in French hands. The Dordogne was the border between France and England. Not far away, on the opposite bank of the river, you can just see a castle that was held by the English. 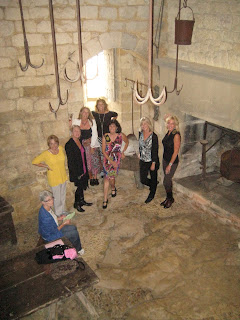 This is the chateau's kitchen.
Ray says all sheilas should spend all their waking hours in the kitchen and not be let out until they've finished preparing three meals every day, because that's what sheilas are for.
Which reminds us that it's nearly time for dinner.