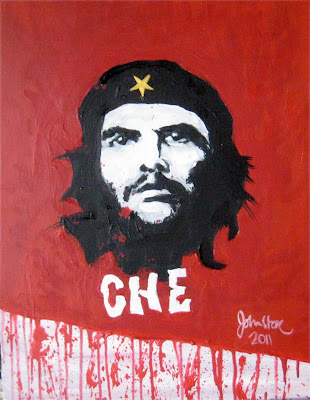 Everyone knows this portrait. If not, pretend you do, because British Pop artist Sir Peter Blake called it one of the great icons of the twentieth century.
The image is based on a photograph of Che Guevara taken by Alberto Korda in 1960. It was later stylized by Jim Fitzpatrick.
The famous Andy Warhol Che Guevara based on Fitzpatrick's design wasn't by Warhol at all. It was produced by his assistant, Gerald Malanga, who passed the painting off as a Warhol when he was short of money. Warhol later 'authenticated' the work on the understanding that all the money involved would flow to him and not to Malange.
My version is for Jacques Rapetti who provides a free open air meal every year in honour of The Rights of Man - Fete de l'humanite.
Posted by Ray Johnstone at 21:16